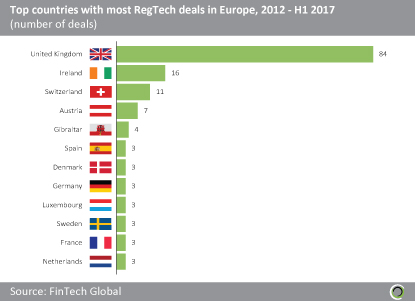 The UK has dominated the European RegTech investment space with 84 deals completed since 2012. That number is greater than the total number of deals completed within the next 11 countries that have the highest deal activity in Europe.

The ranking by cities shows London as the leading location for RegTech investments with 73 deals completed since the beginning of 2012.

The UK and London have maintained their leadership positions in the European country and city rankings over the last 18 months. However, the recent spread of investments over a range of countries and cities illustrates that RegTech innovation is no longer restricted to cities that are home to major financial services centres. RegTech deals are spreading throughout Europe.

The most well-funded RegTech companies in Europe received a combined total of $248.6m between 2012 and H1 2017. Over 30% of this funding went to Fenergo, an onboarding verification specialist, which has received $80.4m of investment since 2012. The company, based in Dublin, received an initial investment of $5.4m in 2013 followed by a $75m round from Aquiline Capital Partners and Insight Capital Partners in 2015.

OpenGamma, which most recently raised $1m in February 2017, received a total of $32.1m between 2012 and H1 2017 making it the second highest funded RegTech company in Europe. Following close behind in third place is Onfido which received a total investment of $30.5m in the same period.

Accelerators have been some of the most active investors in European RegTech companies since 2012, with Techstars and Wayra currently holding the top positions. Between them, the pair are responsible for 16 European RegTech deals over the past five years. Wayra’s involvement in the sector includes funding rounds for Ireland-based Fund Recs and Trustev. Techstars participated in a round to GRC management as a Service provider Alyne, as well as multiple financings to Gibraltar-based QuanTemplate. Startup accelerator Startupbootcamp came joint-fourth in the list with four deals since 2016.

Techstars is the leading investor in European RegTech

An analysis of European RegTech deals by subsector since 2012 shows continuous variation in terms of which subsectors attracted the most deals or the most capital. The data for 2016 shows that over a third of deals and 23% of capital went to companies specialising in the onboarding verification subsector. Companies in this subsector have attracted a lot of investment interest in the past, receiving more than an 80% share of deals or capital in previous years.

In 2016, the cybersecurity/information security subsector attracted the most capital with 42.9% of the total funding going into a 19.4% share of total deals closed. This is the most rapid growth shown by any subsector as no significant deals were completed in this segment prior to 2015.

The data for H1 2017 shows a change to the previous year, but the fluctuation should be seen as indicative of the appeal of other subsectors in addition to those that saw the most deals in previous years, rather than a major shift away in investor interest. The large shifts between subsectors are partly due to the relatively small sample size, but it is clear that the transaction monitoring subsector is seeing renewed interest, with 36.6% share of capital and 14.8% share of deals. This year also saw renewed interest in risk management companies, which accounted for a third of deals and 21.2% of total funding. 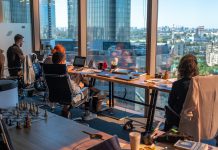 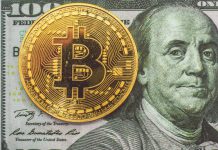 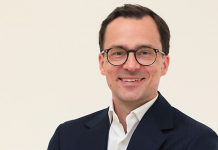 Biden Administration calls on US private sector to help in cyber... 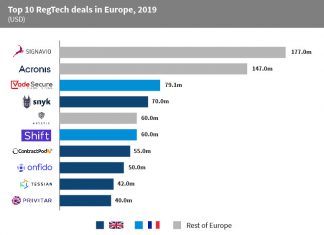 Five of the top 10 RegTech deals in Europe were raised... 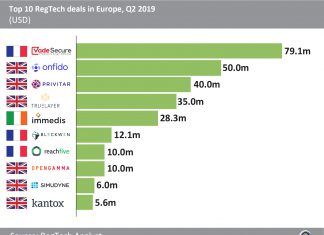