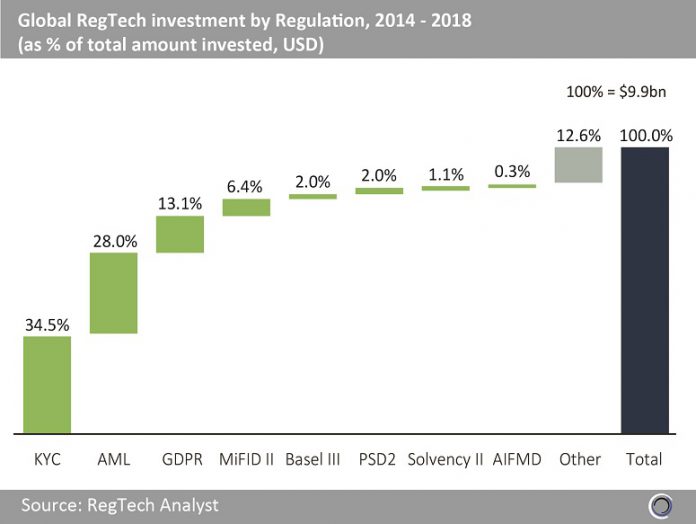 An analysis of the capital invested in RegTech companies according to the area of regulation addressed by their solutions reveals which pieces of legislation appear to be causing the most problems within financial institutions and are thereby deemed to offer the most attractive opportunities for investors.

Just under $10bn was invested in RegTech companies between 2014 and 2018, with 34.5% of this invested in companies providing KYC solutions. AML follows with 28% of the capital invested, GDPR takes third place with 13.1% and MiFID II in fourth place with 6.4% of total investment.

KYC and AML regulations have dominated the RegTech landscape due to their cross-industry applications and heightened expectations from regulators. China’s regulatory landscape has been evolving with the People’s Bank of China paying greater attention to AML initiatives.

Much anticipation and uncertainty surrounded MiFID, implemented in January 2018, with the regulation proving to be one of the biggest shakeups to financial markets following the financial crisis. Symphony Communication Services is MiFID II compliant communications platform and is now one of the most well-funded RegTech companies globally, having raised $296m from investors including Goldman Sachs, JP Morgan and UBS.

Basel III, PSD2, Solvency II and AIFMD take 5.4% share of the total investment combined, with ‘other’ legislation accounting for the remaining 12.6%.

CertiK continues funding spree as it nets $80m Series B2

Ransomware ramps up for the holidays, Darktrace reveals 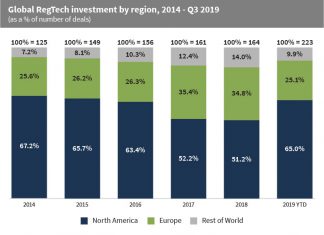 More than one in ten RegTech deals globally since 2014 have... 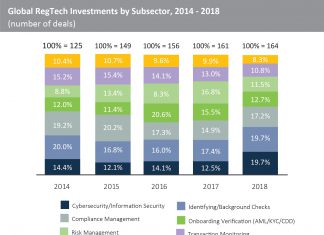 Cybersecurity companies’ share of global RegTech deals has been increasing since...